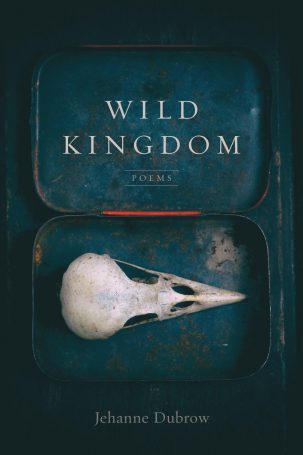 In these razor-sharp satires, odes, and laments, Jehanne Dubrow reminds us that the ivory tower of academia is “the real world” if ever there was one: a place of perilous human interactions, fraught with longing, and ambition, and what she calls “the magnificent gravity of regret.” In lyrics laced with the parlance of the place—from Strategic Plans to Course Evaluations to a final Resignation Letter—Wild Kingdom rewilds academia for those who thought they knew it, and holds a mirror up to campus life in all its tragedy, and poignancy, and folly.

In the isolated wilderness of “the Academy,” colleagues are pitted against one another, men squawk over women in meetings, and people wield their privilege like knives. Jehanne Dubrow’s speaker in Wild Kingdom says, “Once I saw myself in anyone / who stood at the center of a storm.” Though it’s hard “explaining cruelty” because “only / some have felt the coldness of its cut,” this truly astonishing book manages to carve out—with craft and wit and, most daringly, vulnerability—not just the view of a poisoned landscape of learning, but a map of how the self at the center can escape an untamed place where there are “birds of prey and birds / that are preyed upon.” Inside the strangle of broken bureaucracy are moments of life-saving reflection: “I had to believe little cups of gold, / the sharp, green stems of crocuses / were poking through…” This is the book of a person who learned the hard way to survive the brutalities of this kingdom, but who was not hardened by the learning.