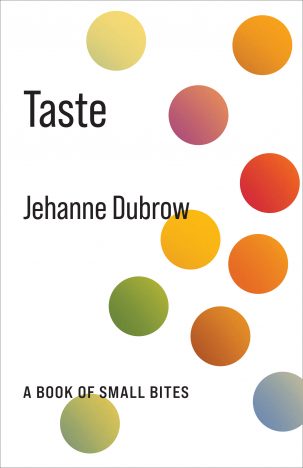 Taste: A Book of Small Bites

From the No Limits series at Columbia University Press

Structured as a series of “small bites,” Taste considers the ways that we ingest the world, how we come to know ourselves and others through the daily act of tasting. With flavorful explorations of the sweet, the sour, the salty, the bitter, and umami, the book offers readers a series of interdisciplinary reflections on the sense of taste, often blending personal experience with analysis of poetry, fiction, the visual arts, as well as religious and philosophical texts. Taste is organized not so much as a linear dinner served in courses but as a meal consisting of meze, small plates of intensely flavored discourse.

Jehanne Dubrow is an intellectual sensualist, a writer of sometimes lyrical, sometimes directly colloquial, and always critical sensibility, her mnemonic taste buds open to memory’s compromised dishes, its condiments and aftertaste. While other food-memory books sometimes threaten an overindulgence of richness, in Taste, Dubrow’s sharp wit and self-awareness serve as the perfect digestivo.

If “tasting begins with sight” (and what a synaesthetic provocation that is!) Dubrow goes on to show this strangely elusive sense manifesting in every form of perception—mind, body, and soul. She writes: “We acquire tastes just as we acquire knowledge: with time and patience, a belief that the pursuit can lead to something delicious”—and something delicious describes this trove of riches perfectly.

—Lia Purpura, author of All the Fierce Tethers

This is a book I wish I had written. In Taste, Dubrow’s range of allusions, from visual arts to poetry, are movingly conveyed. It is to be sampled as a cornucopia of ‘small bites.’ A viaticum of sorts, and a damn good read.

In the form of a very elegantly written essay, Dubrow argues that taste is the main form of access to the world and others. And also, and most importantly, to ourselves. A poetic homage to the power and mysteries of taste.

—Barbara Carnevali, author of Social Appearances: A Philosophy of Display and Prestige