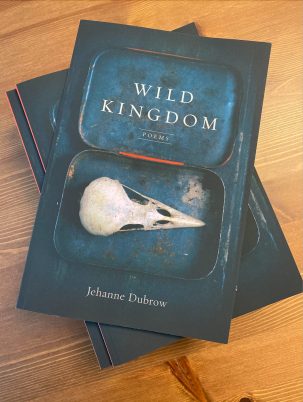 Wild Kingdom is out today. When I think about the eight other poetry collections I’ve written and seen to publication, it’s clear to me that Wild Kingdom had a journey entirely its own: one that began with pain and personal trauma. As a result, the early days of working on the book were challenging, because I couldn’t figure out how to establish distance from my subject matter. I was still angry, furious at how I had been made to suffer. Over time, I developed a metaphor for the book, that of the scientific field note, and I gradually found a voice for the story I was telling.

Wild Kingdom is set in the often cruel world of academia and functions as the poetic version of a campus novel, exploring this strange landscape populated by faculty, students, and administrators. At its center is an examination of power and cruelty, specifically a form of bullying known as academic mobbing (you can read more about academic mobbing at Kenneth Westhues’s site), in which a group of people target an individual for annihilation. The term mobbing comes to us through ornithology; it’s when a group of birds gangs up on another bird, frequently a predator (but sometimes just another member of the flock). In writing Wild Kingdom, I wanted to draw connections between human and animal behaviors. So, in addition to the field notes, the book also includes a series of persona poems in the voices of different birds. The collection often moves between the enclosed world of the campus and the larger political world, examining the ways that abuses of power are essentially the same, how all cruelties share a common DNA. The only difference is scale.

In many ways, I’m glad to be done with Wild Kingdom. The book hurt to write and took all of my critical skills to revise, as I tried to move beyond my personal experiences to larger questions about the hurt and cruelty we inflict on others. You can read sample poems from the book here and here. And you can buy the book here.