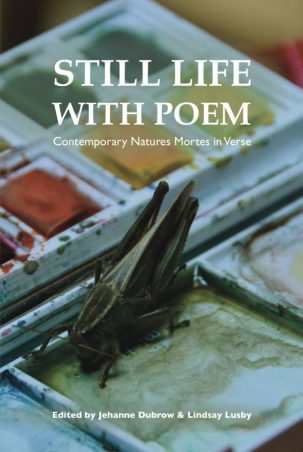 In October 2016, as I was just beginning to settle into my new life in Texas, Still Life with Poem: Contemporary Natures Mortes in Verse, was released. This is the second anthology that I have co-edited with the wonderful poet (and my dear friend) Lindsay Lusby. As with our previous collaboration, The Book of Scented Things: 100 Contemporary Poems about Perfume, this anthology was inspired by an unusual writing prompt:

Poetry. Art. With a tradition that can be traced to Pompeii, the genre of the still life or nature morte has most often been used since the Middle Ages and the Renaissance as a vehicle for symbolism and metaphor, objects serving as stand-ins for philosophical ideas, religious principles, or moralizing messages. In Still Life with Poem, poets were asked to create (or to imagine) their own still lifes and to write poems in response to these thoughtful arrangements of things. And although still life paintings are often viewed as unmoving, quiet works of art, this anthology presents a collection of energetic, urgent voices; these poems speak to current events, the making of art, the domestic, the past, the body, faith, the environment, and the losses we all face.

And now, The Los Angeles Review has published a terrific review of Still Life with Poem. Here’s a little excerpt from the review:

Still Life with Poem straddles genres, themes, and art forms in its eclectic explorations of the ordinary. If stillness is a challenge for the contemporary reader, co-editors Dubrow and Lusby admirably demonstrate that this is a risk worth taking.

You can read the whole review here.