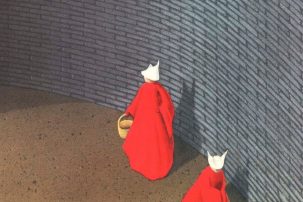 Like so many readers, I first discovered Margaret Atwood’s dystopic novel, The Handmaid’s Tale, when I was a sophomore or junior in college. It was the mid-90s, about a decade after the book’s publication. But, already, The Handmaid’s Tale was canonical (and I went to school known for its particular love of literary canons, St. John’s College, the so-called “Great Books School”).

A wrinkled, water-stained copy of the book was being passed around the second floor, in the dormitory where I lived. Every woman on the floor read it.

I have always been a tremendously fast reader. I read the book in three hours, then held onto it for another week, so that I could read it and read it again.

I remember talking about The Handmaid’s Tale with all of my neighbors on the floor. One of the duller women thought the end-note (written as if by an academic at a conference, far in the future, long after Gilead has ceased to exist) was real. She thought Gilead had existed. She didn’t realize that the book was not nonfiction. Ah, well. Perhaps, in some way, she wasn’t wrong.

Recently, I came across a beautiful essay by Margaret Atwood, which appeared in The New York Times. I was especially taken by this moment:

There are two reading audiences for Offred’s account: the one at the end of the book, at an academic conference in the future, who are free to read but who are not always as empathetic as one might wish; and the individual reader of the book at any given time. That is the “real” reader, the Dear Reader for whom every writer writes. And many Dear Readers will become writers in their turn. That is how we writers all started: by reading. We heard the voice of a book speaking to us.

Certainly, The Handmaid’s Tale was a book that contributed to the reading life that would become my writing life. In Atwood’s novel we see what it means to live inside the female body. We see the intersection of private and public histories. We isolation and the desire for connection. Recently, I reread the book and recognized that things that frighten me all over again, the things that keep insisting on a place in my poems, all these years later.